Another choice for qualitative vacations is the island of Spetses. The picturesque paved paths, the chaises and the absence of cars create an atmosphere of old times. However, the services that are offered are of high quality considering entertainment, accommodation and banquet. The beaches at the island are available for the visitor to discover them and to be surrounded by their magic. Apart from the regular coast itineraries, the island is also accessible by sea taxis. These are also used for transportation at the island.

Spetses are constituted by the island of Spetses and three other smaller islands which are: Spetsopoula, Agios Ioannis and Small Bourboulo. Starting from the old port, the visitor can stroll at the coastal road. If someone reaches the island by vessel, this is the most appropriate point to cast anchor and to enjoy the high quality services offered by the port just by paining the corresponding fee to the port authorities. The new port which is called Dapia is where the frying dolphins and other ships anchor.

The picturesque paved paths, the chaises and the absence of cars create an atmosphere of old times.

There are many hotels and other kinds of accommodation to caver all needs aw well as a great variety of restaurants and cafes. By the time the visitor reaches the island, his transport can be accomplished by buses that are available during the tourist seasons, by taxis, by chaises and by rented bikes and motorbikes. There is a great variety of accommodation, cheap and more expensive ones. The night life of this island begins by the time the night falls and lasts up to the morning and every night club promises intense entertainment. Endly, it is worth trying local recipes, such as fish ala Spetiota.

Nature was very generous with this island. The physical landscape is alternated combining amazing beaches to the mountainous part of the island which is full of pine trees. Many paths start from the plains and continue to the hillocks, guiding the visitor to an exploration route of the nature. If someone wants to visit the chapel of Profitis Ilias which is built at the highest point of the island, then he will have the chance to enjoy a panoramic view of 360°. On the other hand the beaches, organized or free, are models as far as the cleanness of the beach and sea is concerned. There are many choices and the access to any kind of services is easy and direct.

Your email address will not be published

Mandatory fields are marked with an asterisk * The weather in Spetses 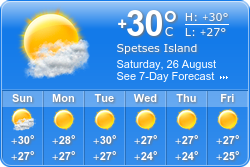