View on map all the sightseeings in Hydra

Andreas Miaoulis Statue is located in the entrance of the port of Hydra on the east side of the port. Andras Miaoulis - Vokos (1769-1835), was a Greek admiral who led the fleet of Hydra and later the whole Greek fleet, during the Greek Revolution (1821), becoming victorious in numerous naval combats.

Historical Records – The Hydra Museum (Ι.Α.Μ.Υ.) is housed in a building of great architecture, at the port of Hydra, just before we reach the statue of Miaoulis. Some great relics from the Greek Revolution are exhibited there, in addition to material relevant to the naval tradition of Hydra.

Argosaronikos.gr is based on the interactivity of its visitors. Add a sightseeing and we will visit the place, take pictures of it, learn more information about and then post it.

It is a bridge of unique beauty and as a matter of fact, the only stone bridge in Hydra. You will come across it at the route from the port of Hydra towards Vlichos, just before you get there. The bridge is believed to have been built in around 1825.

The weather in Hydra 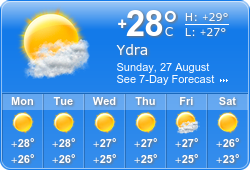