View on map all the sightseeings in Methana

It is a beautiful, picturesque chapel, built right next to the sea, on steep cliffs. According to the legend, a sailor loaded his boat with wine and sailed to find a place to sell it, when his life was in jeopardy because of the bad weather. So, he prayed to Holy Mary and promised to build a chapel with soil and wine, instead of water. After he survived, he fulfilled his promise and built the chapel.

Watch an amazing video captured by a drone!

It is a beautiful cave on the west side of Methana. As shown on the sign at the entrance, it is not organized and you can enter at your own risk. It consists of three chambers with water and stalagmites.

Argosaronikos.gr is based on the interactivity of its visitors. Add a sightseeing and we will visit the place, take pictures of it, learn more information about and then post it.

The dormant volcano in Methana belongs to the volcanic arch of South Aegean, which recorded volcanic activity in antiquity. From reports made by ancient historians, the volcanic eruption of Methana is dated between 276-239 b.C.

It is a castle built on a hill, in the strait of Methana, in 1826, by the French Philhellene Commander, Nikolaos Favieros (1782-1855). The well preserved side of the castle is the southeast which is framed by two towers.

The weather in Methana 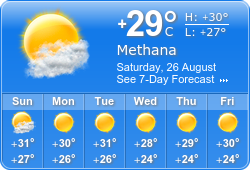